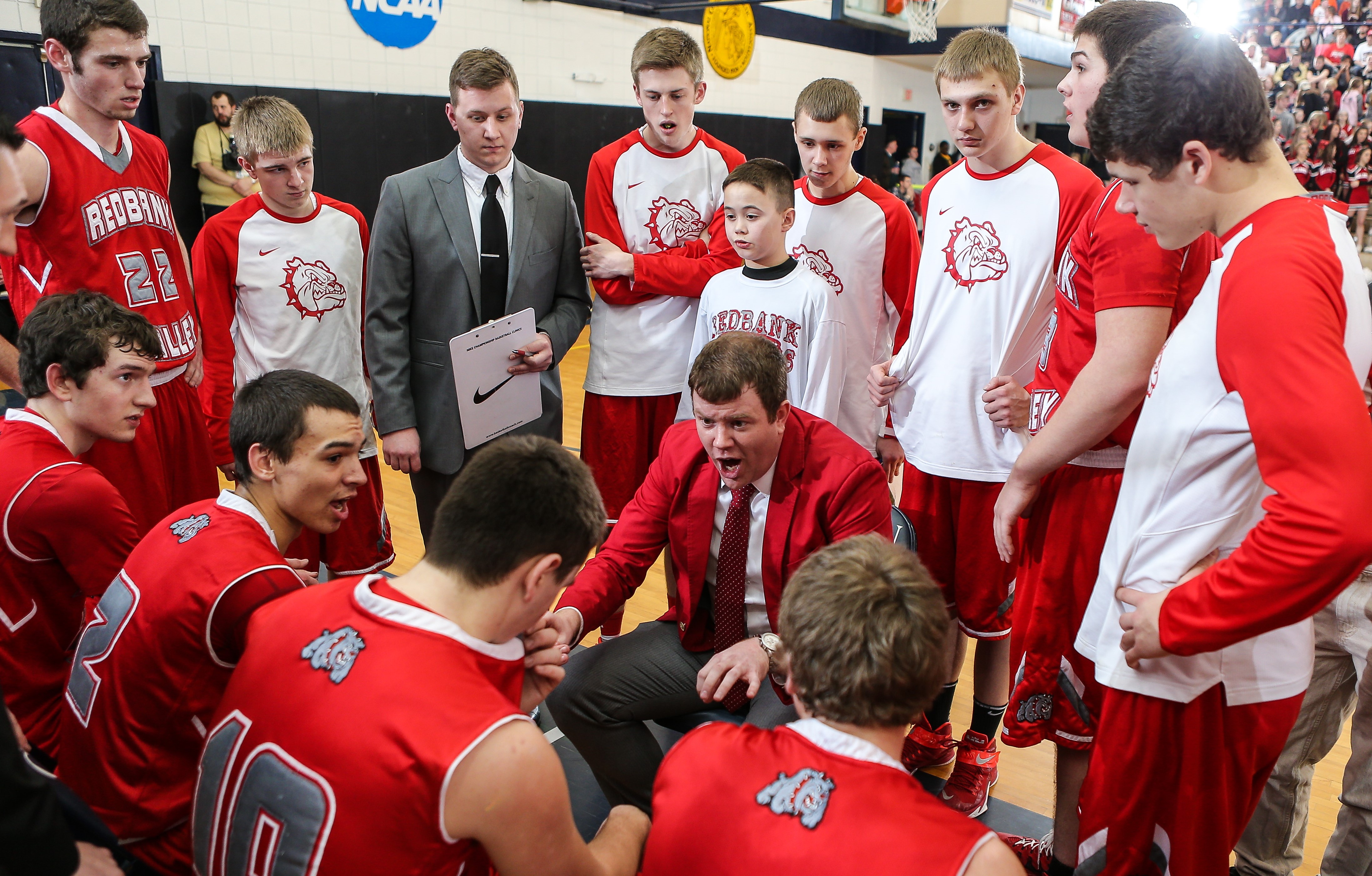 “I’m very excited to work with Coach Bean and have him help mentor our men’s basketball student-athletes,” Allegheny head coach Bob Simmons said. “He is extremely respected in the coaching community both for his work on and off the court. Everywhere Coach Bean has been, he has won in the classroom and on the court. He is a man of integrity, passion, and a wealth of basketball knowledge. I look forward to great things for Gator basketball.”

Bean will have a variety of duties with the Gators.

“Coach Bean will be our recruiting coordinator, which means he will set our recruiting calendar, coordinate all of our on-campus visits, calls, emails, and mail-outs,” Simmons said. “He will also have academic support responsibilities which means he will meet with 5 of our men on a regular basis. He will prepare scouting reports on 12 of our opponents as well as work with our perimeter players and coordinate our team travel and coordinate our social media pages.”

Bean, who spent last year at Waynesburg after being on the coaching staff of NCAA Division III Medaille Collge in BUffalo from 2015 through 2018, is looking forward to his new job.

“I am excited for the opportunity Head Coach Bob Simmons has given me,” Bean said. “Allegheny is an incredible institution that values success in the classroom and on the court.

“I have had a few friends that have attended that speak very highly of Allegheny College and the Athletics Department.

“The staff has done an excellent job in bringing in quality people. I am excited for the challenge of helping elevate this program.”

Bean’s basketball life began at Clarion Area High where he helped the Bobcats win their last District 9 championship in 2003 under the direction of head coach Rob Leone and assistant coach Jess Quinn.

Sports were a natural fit for Bean, whose mom was the gymnastics coach at Clarion University, and whose family is still very involved in athletics.

“My mom was a professor and the gymnastics coach at Clarion University,” Bean said. “My dad ran the scoreboard for home men’s and women’s basketball games at Clarion U while I was growing up. I think being exposed to collegiate athletics at an early age really impacted my life.”

Bean’s sister, Erin, played volleyball at Juniata and is now the Assistant Athletic Director for External Operations at Saint Leo University just outside of Tampa.

“My sister Erin bounced around in Division I at Tennessee Tech, the Northeast Conference and the University of South Florida,” Bean said. “She is now the Assistant Athletic Director-External Operations at Saint Leo University, just outside Tampa, Florida and I couldn’t be more proud of her.

“I think we both owe our passion for athletics to our parents and extended family.”

After high school, Bean attended Ohio Northern University to play basketball and major in mechanical engineering but was eventually cut from the basketball team and he didn’t care for physics.

He transferred back home to Clarion University, and taking the advice of then Clarion Area athletic director Keith Murtha, he began helping out with the Bobcats’ boys’ basketball program.

“(He) knew way more about me than I did myself,” Bean said. “As the saying goes, ‘Those who can’t do, teach.’ I couldn’t do either of those so I decided to coach basketball as something to do and stay around the game.”

Bean was the assistant varsity and head junior varsity coach, for the Bobcats, under Jim Harmon from 2005-2010.

“Looking back, all these signs pointed to trying (coaching basketball) as a profession,” Bean said. “I struggled with finding a passion until my time at Redbank Valley. Everyone’s path is different, but the perseverance I have learned during my journey has made me who I am.”

A highlight of his coaching career came early on.

“One of the fondest memories was during my first game as a coach at my Alma Mater,” Bean said. “We played Shaler High School. A scheduling conflict had us playing the JV game in the Auxiliary gym and my great uncle, Frank Truitt showed up unannounced to the game. He won a National Championship at Ohio State as an assistant coach in 1960 (Bobby Knight, John Havlicek and Jerry Lucas). He was the Head Coach at LSU (Before Pistol Pete) and Kent State. (I believe he has a Wikipedia page). He walked over after the game with a notebook full of notes that I still have to this day. Just was special to be able to share a few moments and talk hoops with him.”

Bean also has fond memories of times with some of his pals from high school.

“(I) graduated with lifelong friends,” Bean said. “We would still hoop together every Sunday up until I left Redbank Valley in 2015. The impact that basketball and our coaches had on us was unusual for basketball at Clarion Area. We were fortunate to have some guys on that team that were committed to winning and focused on basketball.”

Following his time at Clarion Area, Bean moved on to neighboring Redbank Valley, where he was the head coach from 2010-2015.

The Bulldogs won the 2014-15 District 9 Class 2A Championship (it’s first District Championship since 1980) after finishing second the previous season. They advanced to the PIAA quarterfinals that season. He was named the 2014-15 All American Awards & Engraving/D9Sports.com Coach of the Year.

“(I) was fortunate to have some fantastic people come through the gym at Redbank,” Bean said. “I know the success came in the last two years there, but the kids that showed up to practice in the first few years really set the table to make it easier.

“Tom Logan was the Athletic Director who hired me. Brian Dougherty was the school board member in the interviews. Roddy Hartle was the athletic director during the last three years.

“I think the most telling part of the years at Redbank was how many guys would come back and play ‘Sunday Hoops’ with us after they graduated. It was kind of a rite of passage to get to play with the guys I had been playing with for the majority of my life. Roddy Hartle and Pat Craig were always willing to help and were both teachers at the school. I brought Doug Dorio as an assistant coach my first year with me from Clarion Area while we both finished up school. Mike Sherry was an assistant with me my second year after his playing career was over at Clarion U.

“I also had Cody Renninger, who played at Clarion Area with Coach Harmon and myself, help out that year. Vinnie Granato and Jon Joy did some neat things while they were on staff. Brandon Bain, who played his senior year with me my first year at Redbank, was my assistant coach my last two seasons. AJ McCrea and Mike Dawson were also alums that helped out the last two seasons. Vinnie is an assistant coach for the women’s basketball team at Goshen College in Indiana. Mike Sherry went on to be an assistant coach at Chatham University after our time together. All of those guys deserve a lot of the credit for helping the day to day to really make an impact on that program.”

Bean also pointed out the help he got from Chris Edmonds, the current girls’ basketball coach at Redbank Valley, as well as many other parents who helped with the elementary program.

“They really helped start a skill base in the younger ages that will hopefully continue to raise the level of both programs there,” Bean said. “The parents and boosters at Redbank were unbelievable in keeping me organized and connecting the dots. We were always able to outfit the players with some neat stuff and were always able to fundraise enough funds to do so. The connections I still have with former players, coaches, parents and staff from Redbank are very special to me.”

“That last year at Redbank I caught the bug,” Bean said. “I wanted to see if coaching was really for me and could I do it for a living.

“I am very fortunate Head Coach Mike Blaine took a chance on me. He played at Johns Hopkins with Clarion Area grad Matt Righter (son of former Clarion U. head coach Ron Righter) and worked Clarion University basketball camps. So when my resume came across his desk, he called Coach Al Modrejewski about me. It is all about connections. I had never really been to Buffalo. I had to work three or four jobs to be able to live but when you’re chasing your passion it is all worth it.”

The Mavericks won the Allegheny Mountain Collegiate Conference (AMCC) regular and postseason titles in 2017 and received an automatic berth to the NCAA Tournament.

“NCAA Division III has the most schools in any division of the NCAA (Over 400),” Bean said. “In 2017, it was the first year that they allowed 64 teams into the tournament. There were 43 automatic bids and 21 at-large bids. Your chances for an at-large bid are slim.”

During his time at Medaille, Bean ended up recruiting Jonathan Smith from his alma mater.

“I made a special trip home during the week that fall to be able to check out an open gym with Coach Quinn and see Jon for the first time,” Bean said. “It was a little difficult to get him to open up at first, but after some time we were in constant communication.

“Jon came to Medaille as a freshman during our championship season. He was a great piece to have and could impact games by rebounding the basketball.

“I remember him coming up to visit Medaille with his Mom and brother. His brother got out of the car and recognized me from the Clarion University Rec Center and his mom had all the handwritten notes I had sent to Jon that year. I knew we were going to get along great after that.”

Bean said recruiting is arguably the most important part of his job.

“I try to establish a great relationship with a prospective student-athlete first and foremost,” Bean said. “Basketball is a sport that spans both semesters of college. There is a lot of time over winter break where you are only with your teammates and coaches. You need to have close relationships.

After his time at Medaille, Bean moved on to another Division III school in Waynesburg.

“Waynesburg provided a unique opportunity for me,” Bean said. “I had met head coach Mark Christner during his recruitment of Jake Dougherty at Redbank Valley. He called me in April and said he had a position open and thought I would be a great fit. I had kept in contact with Coach Christner during my time at Medaille and already had a great relationship with him. It was a no brainer to get a little closer to home and have the chance to impact a program.”

At Waynesburg, Bean had the chance to coach two of his former Bulldog players in Dougherty and Sam Heeter.

“What made Waynesburg even more special was the opportunity to get to work with two guys I had coached at Redbank Valley in Sam Heeter and Jake Dougherty,” BEan said. “It was really neat to be able to expand my relationships with those guys as their coach on a collegiate level.

“Its interesting though, we have so many restrictions set by the NCAA, that I was around them in the gym more when I was at Redbank Valley. It allowed me to get a first-hand look at how much they had grown off the court, in the three years we were apart.

“Waynesburg had some tremendous people. The other coaches in the department and our assistant chaplain are people I will continue to build with from afar.”

Portions of this story first appeared on ClarionSportszone.com. Special thanks to Dave McClaine for allowing us to republish the article.