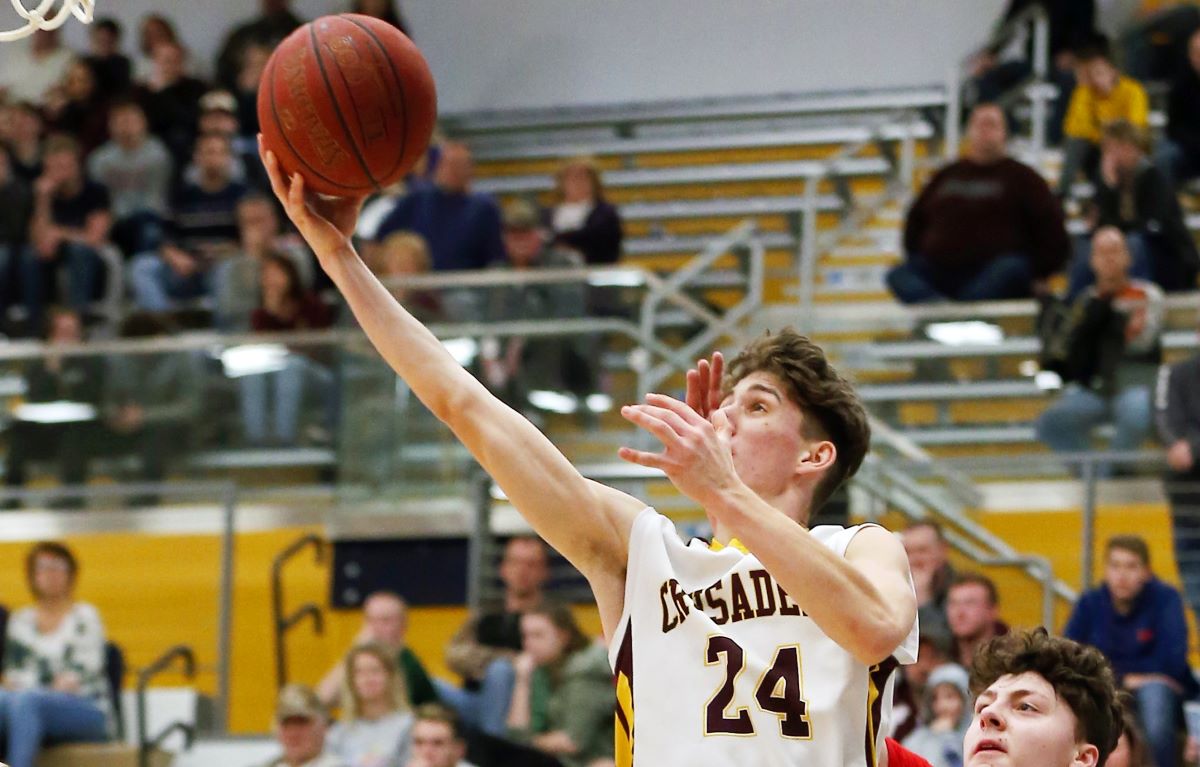 CLARION, Pa. – Limiting Imani Christian, the sixth-place team out of the WPIAL, to just 11 combined points in the second and third quarters, District 9 champion Elk County Catholic moved into the second round of the PIAA Class 1A tournament with a 56-34 win.

“I thought our defense was pretty good,” ECC head coach Aaron Straub said. “If you take away their three balls in the first quarter (Imani hit four first-quarter 3-pointers), we really played an outstanding defensive game in the first half.”

After playing to a 13-all tie after one quarter, ECC outscored the Saints 13-2 in the second quarter to take a 26-15 halftime lead not allowing Imani Christian a basket until the 2:50 mark of the quarter.

“We play good team defense,” ECC senior Regis Wortman said. “Everyone knows what to do. There is a good synergy.”

Wortman played a big role in the win on offense scoring a game-high 25 points, his second-best output of the season. All 25 tallies came in the first three quarters.

“My teammates did a really great job getting me open,” Wortman said. “I have to give them credit.”

Wortman was particularly good in the first quarter – nine points – and the third quarter – 10 points – first keeping ECC in the game and then helping the Crusaders expand their lead to 19, 43-24, going to the fourth quarter.

“There’s no secret that I’ve been telling people how good Regis is,” Straub said. “He just does so many things that go unnoticed and so many things that he does well. He is really a big part of what were’ trying to do, and, hopefully, what we’ll continue to do.”

Up 19 going to the fourth, ECC played a clock-control game but had trouble putting the Saints completely away because of poor foul shooting – the Crusaders were 8 of 15 from the line in the fourth quarter, although they did hit their final five charity shots.

“We have to be better,” Straub said. “The free throws we missed tonight looked pretty good and were all around the rim but just didn’t go in. I think we will shoot our free throws a lot better the next time.”

Carter Lindemuth added nine points for ECC, all from the free-throw line and all in the fourth quarter when he went 9 of 14 from the line.

NOTES – ECC will take on WPIAL runner-up Cornell in the second round Tuesday, March 10, at a site and time to be announced Sunday. Cornell beat Saltsburg, 74-29, Friday night and beat Imani Christian, 84-65, in the WPIAL quarterfinals … ECC held the Saints to nine field goals, five of which were 3-pointers, and limited Imani Christian to just five field goals in the final three quarters.

ST. MARYS, Pa. – Behind a double-double effort from Caden Beldin, District 9 second-place Cameron County cruised to a 61-38 victory over District 6 runner up Williamsburg in the first round of the PIAA Class 1A playoffs at St. Marys High School.

Beldin had a game-high 25 points and completed the double-double by hauling in 15 rebounds.

“I was happy that everyone got to see what I see in practice,” Cameron County head coach Mark Guido said of Beldin’s efforts. “That kid is relentless. He may foul somebody, but he’s going to keep working hard. That’s who we are.”

Along with Beldin’s offensive performance, Dylan Guisto, Gavin Morton and Jon Good all made offensive contributions to put the Red Raiders, who won a PIAA game for the first time since 2015, up 23-10 at the end of the first quarter.

Good knocked down a pair of 3-pointers while Morton and Guisto each had one.

“It’s huge,” Beldin said of the first quarter. “Our threes were falling, so that helped us a lot. All of our players are just as important as every single one of us and whether one of us is on or off it doesn’t matter. We play team ball.”

The second quarter saw Williamsburg go on an 11-4 run to cut the deficit to 27-21 behind six points from Shane Brantner and five from Lambert Palmer.

But Hayden Brown responded by knocking down a 3-pointer and Beldin added five more tallies as the Red Raiders finished the last two minutes on an 8-0 run and a 35-21 halftime lead.

“It was good for our confidence,” Guido said of the strong first half. “You don’t want to lose a game (like Cameron County did in the D9 finals to Elk County Catholic) and come in and get down right away. It affects the way you play.”

Cameron County started putting Williamsburg away in the third quarter limiting the Blue Pirates to six points with two being free-throws.

Williamsburg continued to struggle to find offense in the fourth managing three field goals (four points from Palmer and a 3-pointer from Zach Kagarise) and four points from free-throws.

Palmer paced the Blue Pirates with 15 tallies while Brantner chipped in 12.

Guisto finished with nine points for the Red Raiders and Morton and Good each netted eight points apiece. Cameron County will move on to the second round of the PIAA Class 1A Playoffs and face Bishop Canevin, the fourth-place team out of the WPIAL, Tuesday, March 10, at a site and time to be determined. Bishop Canevin knocked off Commodore Perry, 87-35.

JOHNSTOWN, Pa. – Kaden Park’s off-balance shot from about 12 or 13 feet away with about four seconds to play was off the mark, and Clarion-Limestone’s valiant fourth-quarter comeback attempt came up just short in a 62-60 loss to Bishop Carroll in the opening round of the PIAA Class 1A tournament at Richland High School.

The Lions, the third-place team out of District 9, trailed 49-35 going to the fourth quarter but rallied behind the play of Deion Deas and Hayden Callen.

Deas scored 10 of his 25 points in the fourth quarter, while Callen added nine of his 17 in the final eight minutes.

C-L closed the gap to two and had the ball coming out of bounds in front of its bench with 7.6 seconds to play.

Callen triggered the ball inbounds, and Bishop Carroll did a good job of taking away Deas. The ball ended up in Park’s hands, and the senior tried and off-balance shot from the right side that ended up being an airball that was rebounded by the Huskies, who were able to run out the clock.

C-L trailed 31-26 at halftime but got behind by 14 after a tough third quarter that saw Tristan McDannell scored six of his 22 points.

Scotty Semelsberger and Hamid Ropkey each chipped in 10 points Huskies.

Bishop Carroll will play Shade, a winner over Nazareth Prep, 63-56.

ST. MARYS, Pa. – Despite a strong push in the fourth quarter, a Clearfield rally came up short as the District 9 Champion Bison fell to the WPIAL second-place Belle Vernon, 65-60, in the first round of the PIAA Class 4A playoffs at St. Marys High School.

The Bison trailed 58-46 with 3:43 left in the game but went on a 13-3 run to cut the deficit to 61-59 behind five points from Karson Rumsky, four from Cade Walker and a big 3-pointer from Cole Miller.

Poor free-throw shooting also aided the Bison comeback, as the Leopards went 3-for-9 at the charity stripe in the final three minutes.

A shooting foul gave Walker a chance to tie the game but he made one of two at the line, and the Bison trailed 61-60 with 40 seconds left.

Devin Whitclock knocked down his two free throws on the ensuing possession to put the Leopards up three with 21 seconds left, and a costly turnover by the Bison saw Mitchell Pohlot go the other way on a breakaway with Thomas Hepple putting the ball in on off the original missed layup to seal the game.

“The kids did a fantastic job,” Clearfield head coach Nate Glunt said. “We were playing as a team. We never quit while we were down by 10 in the fourth quarter, and we cut it down to one.”

A slow first quarter was the difference for the Bison.

Belle Vernon jumped out to a 25-10 lead in the first behind five 3-pointers (two apiece from Daniel Gordon and Jake Haney and one from Jared Hartman).

Clearfield then trailed 28-10 less than a minute into the second quarter after a three-point play from Hepple, but slowly fought their way outscoring the Leopards, 18-14, to cut the deficit to 39-28 heading into halftime.

Walker and Matt Pallo each scored four apiece in that run to help cut the deficit, but the Leopards finished the quarter on a 5-0 run and the Bison trailed 48-41 entering the final quarter. Cade Walker of Clearfield brings the ball up the court during action Friday night. Photo by Jared Bakaysa

Rumsky went on to score 10 of his game-high 20 points in the fourth quarter, including a pair of 3-pointers and a pair of free throws and helped start the 13-3 run towards the end.

Whitlock, who was held to nine points through the first three quarters, was the leading scorer for Belle Vernon with 17 points, Thomas Hepple added 13 and Haney finished with four 3-pointers.

Walker finished with 18 tallies while Pallo and Miller each had eight for Clearfield.

Belle Vernon will move on to the second round of the PIAA Class 4A playoffs and faces Lancaster Catholic, a 59-56 winner over Ringgold Tuesday, March 10, at a site and time to be announced.

Clearfield postseason information is brought to you by: Lezzer Lumber • 120 Pub and Grub in Clearfield • Green Advantage Lawncare & Landscaping