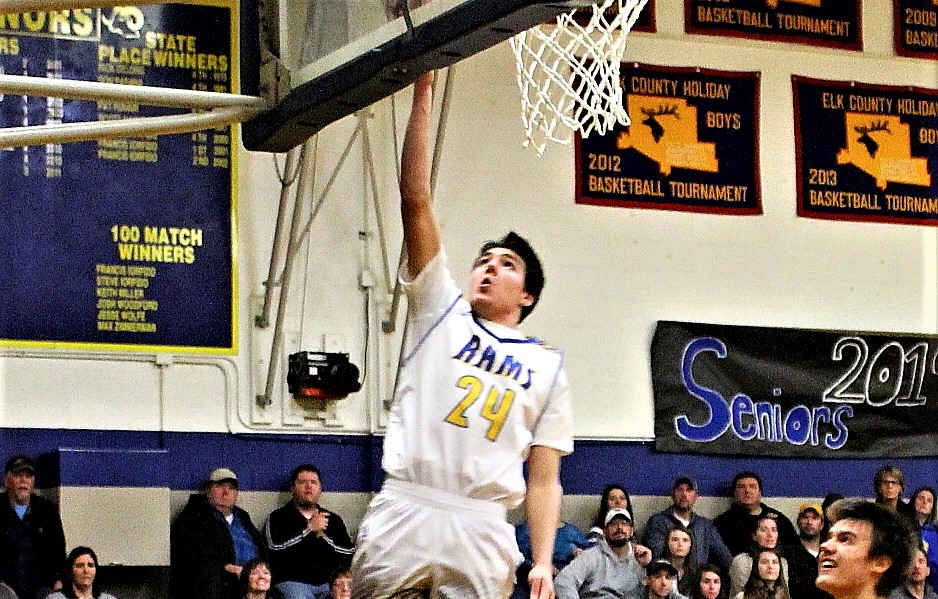 Ridgway rallied from a 29-24 deficit with just over three minutes to play in regulation to force overtime with the game tied at 29.

The Elkers then won the tip to start the extra session and went into a spread offense taking nearly two minutes off the clock before Green got a steal and fed Isaac Schloder who was fouled trying a layup. Schloder hit both free throws to put the Rams ahead for good, 31-29.

Green then came up with another steal and this time drove to the hoop himself to make it 33-29, and Johnsonburg hit just enough free throws, 4 of 10, to put the game away.

Down five late in regulation, Ridgway got back in the game when Parker Rohr hit a 3-pointer with 3:06 left to cut the lead to 2:47. Will Thompson then tied the game at 29 on an offensive rebound and bucket with 2:47 to play.

The Elkers got the ball back with 2:12 left and stalled before taking a timeout with four seconds to play in regulation. Out of the time out, Jake Reynolds attempted a 3-pointer, but his shot was off the mark sending the game to overtime.

KARNS CITY, Pa. – In a matchup of KSAC division leaders, North Clarion got hot from the outside on its way to a 74-51 win at Karns City.

The Wolves hit 11 3-pointers led by six from Korey Mills, who scored a game-high 24 points to go with five rebounds, a steal and a blocked shot.

Mills talked about the victory.

Will Uberti and Regis Wortman also contributed to the Crusader offense with Uberti scoring nine points and Wortman seven.

AUSTIN, Pa. – Joe Griffen and Evan Brooks both recorded double-doubles to lead Galeton to a 70-52 road NTL win over Austin.

Griffen and Brooks combined for 45 points in the win with Brooks netting 24 and Griffen 19. Isaiah Shuemaker chipped in 16 for the Tigers.

Jackson Glover had a team-high 18 points, Blake Burgett tallied 17 and Dempsey Glover chipped in for 14.

Ian Callen, in his first game of the year, added 16 points and eight rebounds for the Lions with Curvin Goheer netting 10 points. Hayden Callen tallied 16 rebounds to go along with nine points and Julian Laugand had six assists.

SMETHPORT, Pa.- Ian Woodruff and Eric Szarowicz combined for 22 points to lead Smethport to a 55-27 victory over visiting Port Allegany in NTL action.

Woodruff had a team-high 12 points while Szarowicz had 10. Noah Costa also chipped in nine points for the Hubbers.

Collin Smith paced Port Allegany with 12 points. Howie Stuckey did not play in this game for the Gators.

Newcome netted 17 points for the Chucks and Blose added 16. Daren Byers chipped in for 13 and Micah Kriebel added 10.

Marcus Badzik had a team-high 16 points to pace Marion Center.

EMPORIUM, Pa.- Jake Walters had a game-high 27 points to guide Cameron County to a 66-54 win over Brockway Friday night.

Walters hit nothing but the bottom of the net the entire game shooting 12 of 12 from field-goal range. Matt Swartz and Marcus Brown each had 12 tallies themselves for the Red Raiders.

BROOKVILLE, Pa. – Trenton Gilhousen scored seven of his 10 points in the fourth quarter as Brookville finally found separation from visiting Bradford in a 54-49 D9 League victory.

The teams mirrored each other through three quarters with each scoring nine first-quarter points, 14 second-quarter points and 12 third-quarter points before the Raiders were able to secure the victory with a 19-point fourth quarter.

Tyler Gigliotti had a game-high 24 points for Bradford while adding four assists and three steals. Gavin Babcock added 15 points and five rebounds for the Owls with Donnie Pattison chipping in five points and six boards.

HYDE, Pa. – Hunter Klotz scored 12 of his game-high 23 points in the third quarter to help visiting Central-Martinsburg erase a four-point halftime deficit on its way to a 53-44 Mountain League win over Clearfield.

Clearfield led 20-16 at the break but behind Klotz, the Dragons outscored the Bison 19-9 in the third quarter and 37-24 in the second half.

Braden Kitt added 12 of his 14 points in the second half for Central-Martinsburg.

COUDERSPORT, Pa. – Owen Chambers scored 18 of his game-high 25 points in the first quarter, as Coudersport rolled past visiting Oswayo Valley, 99-16.

Behind Chambers, the Falcons led 35-8 at the end of the first quarter and extended the lead to 46-11 by halftime. They then outscored the Green Waver 43-5 in the second half.

It was the fourth time in the past five games Orton has scored at least 30 points, and he is averaging 33.8 points per game over that stretch.