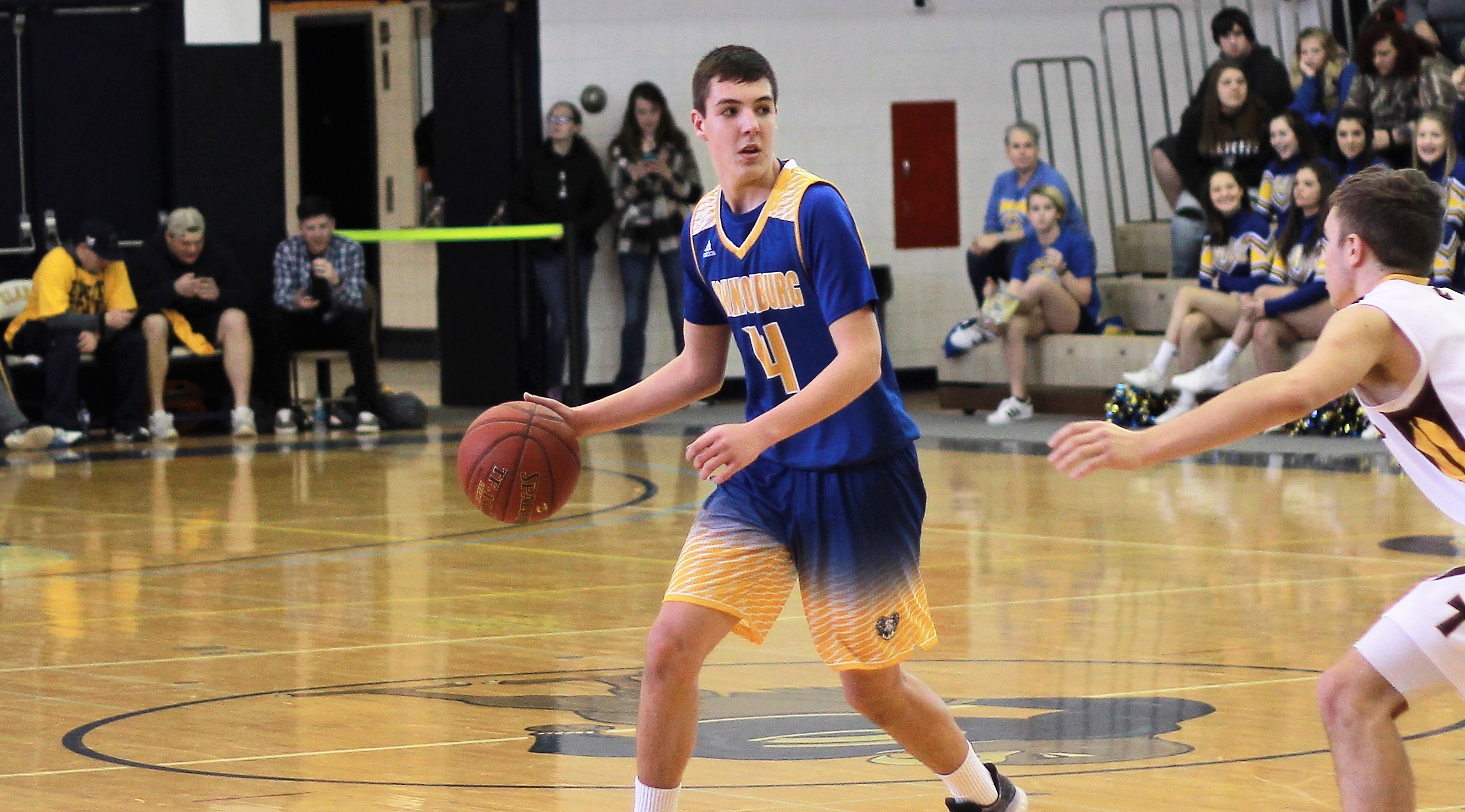 Here is a look at the Friday night games.

When and where: 7:30 p.m. Friday, March 9, at Clarion University’s Tippin Gym.
About Johnsonburg: The Rams surprised Elk County Catholic, which beat them twice in the regular season, in the D9 title game with a 36-30 win … Johnsonburg was 1-1 in the PIAA playoffs last year as the D9 second-place team beating Jamestown in the opening round before falling to Saltsburg in the second round … Austin Green leads Johnsonburg at 11.2 ppg while Kacey Raubenstrauch adds 9.4 ppg.
About Eden Christian: The Warriors went 1-1 in the WPIAL playoffs beating Geibel Catholic but losing to Union-New Castle. They qualified for the PIAA playoffs when Union-New Castle reached the championship game … Last season, Eden fell to Elk County Catholic, 52-41, in the opening round of the PIAA playoffs … The Warriors haven’t played since Feb. 22 and are 3-3 in their last six games … Chase Haring leads Eden at 20.0 points per game.
Winner Gets: Winner of the St. Joseph’s Academy (6-2)/Shanksville (5-2) game.

When and where: 6 p.m. Friday, March 9, at Clarion University’s Tippin Gym.
About ECC: The Crusaders were considered the favorites to tri-peat as District 9 1A champs but were upset by Johnsonburg, 36-30, in the D9 title game Saturday … ECC struggled, for its standards, down the stretch going 3-4 in its seven games heading into the PIAA bracket … Last season, ECC advanced to the PIAA 1A quarterfinals with wins over Eden Christian and Williamsburg before losing to eventual champion Kennedy Catholic in the round of eight … Ryan Newton leads ECC at 17.4 ppg, Alex Breindel adds 8.8 ppg and Logan Hoffman 8.1 ppg.
About Jamestown: The Muskies lost to Kennedy Catholic, 81-27, in the D10 title game. Jamestown had won three in a row before that loss but was just 5-6 in its final 11 games leading into the PIAA tournament … A year ago, Jamestown lost to Johnsonburg in the opening round of the PIAA 1A bracket … Austin Smith leads the Muskies averaging 15.3 ppg with Darian Keyser adding 11.7 and Dawson Urbansky 8.6.
Winner Gets: Winner of Bishop Carroll (6-1)/Imani Christian (7-4) game.

When and where: 6 p.m. Friday, March 9, at Butler High School.
About North Clarion: The Wolves were the top seed in the D9 tournament but were knocked off by Johnsonburg, 45-42, in the semifinals before rebounding to beat Cameron County, 65-57, in the consolation game … North Clarion enters the PIAA playoffs having won 12 of 14 … This is the second straight year North Clarion has been to the PIAA playoffs. Last year, the Wolves fell to Monessen, 94-28, in the opening round as the fourth-place team out of D9 … Nathan Banner, a 1,000-career point scorer (1,034), leads North Clarion averaging 16.7 ppg. 6-foot-7 junior Kyle Mills adds 9.9 ppg with Jesse Schmader contributing 6.9 ppg and Keeven weaver 6.3 ppg.
About Union-NC: The Scotties dropped a heartbreaker, 54-51, to Vincentian Academy in the WPIAL title game. It was just the third loss since New Year’s for Union-New Castle, which has won 11 of 13 heading into the PIAA playoffs … The Scotties like to shoot the three ball and have three players with at least 38 triples and two over 50 …. Tre Charles leads Union-New Castle at 22.8 ppg while hitting 50 3’s, while Nate Meeks adds 11.1 ppg with 56 3-pointers. Evan Pinkerton adds 10.1 ppg with 26 made threes with Seth Pinkerton adding 10.0 ppg and Matt Costello, a 3-point specialist, 5.4 ppg with 38 3-pointers … Last year, the Scotties lost to Shanksville in the opening round of the PIAA playoffs after finishing third in the WPIAL.
Winner Gets: Winner of defending state champion Kennedy Catholic (10-1)/Propel Andrew Street Charter (7-5) game.

When and where: 7:30 p.m. Friday, March 9, at Northgate High School.
About Cameron County: The Red Raiders are back in the PIAA Tournament for the first time since 2015 when they made it to the second round of the 1A bracket as the second-place team out of D9 beating Saltsburg before losing to Kennedy Catholic … Cameron County was the third seed in the District 9 tournament but lost to Elk County Catholic, 46-25, in the semifinals and to North Clarion, 65-57, in the consolation game. Those losses dropped the Red Raiders to 2-5 in their last seven games … Adam Shaffer leads the Red Raiders at 17.3 ppg, Marcus Brown adds 11.3 ppg, Dino Brown 8.9 ppg, Caden Beldin 8.5 ppg and Ty Bauer 7.3 ppg.
About Vincentian Academy: The Royals start a pair of freshmen including 6-foot-6 Angelo Reeves, who Mike White of the Pittsburgh Post-Gazette described as “raw” but talented. Alex Griggs is the other ninth grader starting. Zach McDonough leads Vincentian at 20.3 ppg … The Royals beat Union-New Castle, 54-51, to win the WPIAL title. It was Vincentian’s fifth straight win and 13th in the last 15 games. Most of the Royals losses have come to the who’s who in Western Pa. including Moon, Cardinal Wuerl North Catholic, Aliquippa, Allderdice, Union-New Castle and Quaker Valley. They also lost to Central Florida Christian … Last year, Vincentian was the fourth-place team out of the WPIAL and lost to Saltsburg in the opening round of the PIAA playoffs.
Winner Gets: Winner of Shade (5-1)/Cornell (7-3) game.

When and where: 7:30 p.m. Friday, March 9, at St. Marys High School.
About Clearfield: The Bison won their fourth straight District 9 title (2 in 4A and 2 in 3A) with a 42-36 win over Bradford. This title was a bit of a surprise considering the Bison had to replace pretty much everyone from a year ago … Clearfield is still looking for a PIAA weekend playoff win. The Bison did beat Obama Academy in a play-in midweek game two years ago before losing to Mars. Last year, Clearfield suffered a heartbreaking 48-46 last-second loss to McGuffey … Reese Wilson leads the Bison at 12.0 ppg, Cade Walker adds 9.4 ppg, Jon Gates 8.5 ppg and Ryan Chew 7.5 ppg … Clearfield has won 5 of 6 heading into the PIAA playoffs.
About South Fayette: The Lions finished second in their section in the WPIAL a game back of Belle Vernon but went just 1-1 in the WPIAL playoffs beating Freeport by three, 48-45, before losing to eventual champion New Castle, 55-45 … South Fayette’s last game was Feb. 24 in the loss to New Castle … Some key players for South Fayette include Tim Locher, who had 13 points in the loss to New Castle and nine in the win over Freeport, Connor Mislan, who had 12 in the win over Freeport and Noah Plack and Drew Franklin, who each scored 10 in the win over Freeport.
Winner Gets: Winner of New Castle (7-1)/Fort LeBoeuf (10-4) game.

When and where: 6 p.m. Friday, March 9, at St. Marys High School
About Coudersport: The Lady Falcons won their second straight D9 title in convincing fashion with a 63-45 win over Kane and have won seven in a row and 20 of 21 headed into the PIAA playoffs under first-year head coach Brian Green, who is in his second stint leading Coudersport … Last year, the Lady Falcons dropped a first-round PIAA game to Leechburg, 55-51 … 1,000-point scorer Haley Keck (1,470 career points) leads the way averaging 20.3 ppg. Shaelyn Black chips in 14.6 ppg, freshman Sarah Chambers 9.1 ppg and EmmaRae Easton, who had a career-high 22 points in the title game win, 8.6 ppg.
About California: The Trojans beat Washington, 50-40, in the opening round of the WPIAL playoffs before losing to eventual champion Vincentian Academy, 64-31, in the quarterfinals but rode VA’s coattails into the fifth spot out of the WPIAL. The loss to the Royals was the fourth in eight games for California … Bailey Vig leads the Trojans at 15.6 ppg.
Winner Gets: Winner of Reynolds (10-2)/Serra Catholic (7-3) game.

When and where: 6 p.m. Friday, March 9, at Clarion High School
About Kane: The Lady Wolves attempts at a first D9 title were foiled for the second year in a row by Coudersport, 63-45 … Last year, Kane played Bishop Guilfoyle in the PIAA playoffs losing 52-45 … A pair of 1,000-point scorers lead the Lady Wolves. Senior Trinity Clark (1,198 career points) averages 12.1 ppg while 6-foot-2 junior Ella Marconi (1,064 career points) is the team’s leading scorer at 15.5 ppg. Rachael Morgan adds 9.7 ppg and Hannah Buhl 6.9 ppg … Kane’s only other loss is to unbeaten North Clarion, the D9 1A champion.
About Bellwood-Antis: The Lady Blue Devils were the fourth seed in the D6 tournament despite just two regular-season losses and lost to top-seeded Blairsville, 44-37, in the semifinals before knocking off Penns Manor, 76-48, in the consolation game with all four teams advancing to the PIAA playoffs … This is Bellwood-Antis’ fifth trip to the PIAA playoffs in six years and last year it advanced all the way to the semifinals out of the D6 runner-up spot before losing to Bishop McCort, the same team it lost to in the 2017 D6 title game … Alli Campbell, a 6-foot sophomore, leads the way for the Lady Blue Devils scoring 26.2 ppg … Fellow 6-0 sophomore Sakeria Haralson adds 13.0 ppg while another sophomore, this one “only” 5-6, Emilie Leidig chips in 12.3 ppg with junior Riley D’Angelo scoring 10.5 ppg.
Winner Gets: Winner of West Middlesex (10-1)/Leechburg (7-6) game.

When and where: 6 p.m. Friday, March 9, at Northgate High School.
About Keystone: It was a heck of a turnaround of the Lady Panthers after an 0-6 start winning 13 of 19 to reach the PIAA playoffs. That includes a 51-39 win over Cranberry in the D9 consolation game. It was Keystone’s seventh win in nine games … The Lady Panthers are back in the PIAA playoffs after missing them last year. Two years ago, Keystone was the D9 1A champion and advanced to the second round of the PIAA playoffs … 1,000-point scorer Taylor Geer (1,389 career points) leads Keystone averaging 20.6 ppg. She is the lone Lady Panthers player in double digits. Makenzie Byerley adds 6.8 ppg, McKenzie Hovis 5.8 ppg and Tessa Weaver and Emily Lauer 5.4 ppg each.
About Vincentian Academy: The Royals are on a 22-game win streak with their lone loss coming way back on Dec. 10 to Philadelphia West Catholic, 54-39, in Washington, D.C. … Vincentian was the WPIAL runner-up last year and went 1-1 in the PIAA playoffs beating Cambridge Springs but losing to Bishop McCort … The Royals beat Chartiers-Houston, 62-47, in the WPIAL title game … Duquesne recruit Caroline Elliott leads Vincentian scoring 16.9 points per game while adding 8.5 rebounds per contest.
Winner Gets: Winner of Blairsville (6-2)/Tussey Mountain (5-2) game.

When and where: 7:30 p.m. Friday, March 9, at Clarion High School
About Brookville: The Lady Raiders are back in the PIAA tournament for the first time since 2013 when they lost to Sharpsville in 2A. Brookville hasn’t won a PIAA playoff game since 1985 when it beat Conemaugh Valley and lost to Iroquois in 2A … The Lady Raiders qualified for the tournament by beating Karns City 46-39 in the D9 title game … A year ago, Brookville was 6-16 … Marcy Schindler leads Brookville at 10.4 ppg, Morgan Johnson adds 9.8 ppg, Madison Johnson 7.7 ppg and Kira Powell 6.1 ppg.
About Northwestern: The Wildcats are in the PIAA tournament for the first time since making it to the Elite 8 in 2A in 2001 including a win over Moniteau, 66-52, in the first round … Northwestern lost to Seneca in the D10 title game … Edinboro recruit Monica Brown leads the Wildcats at 18.5 ppg and has scored over 1,000 in her career. Julie Wheeler adds 12.3 ppg.
Winner Gets: Winner of East Allegheny (7-2)/Central-Martinsburg (6-4) game.