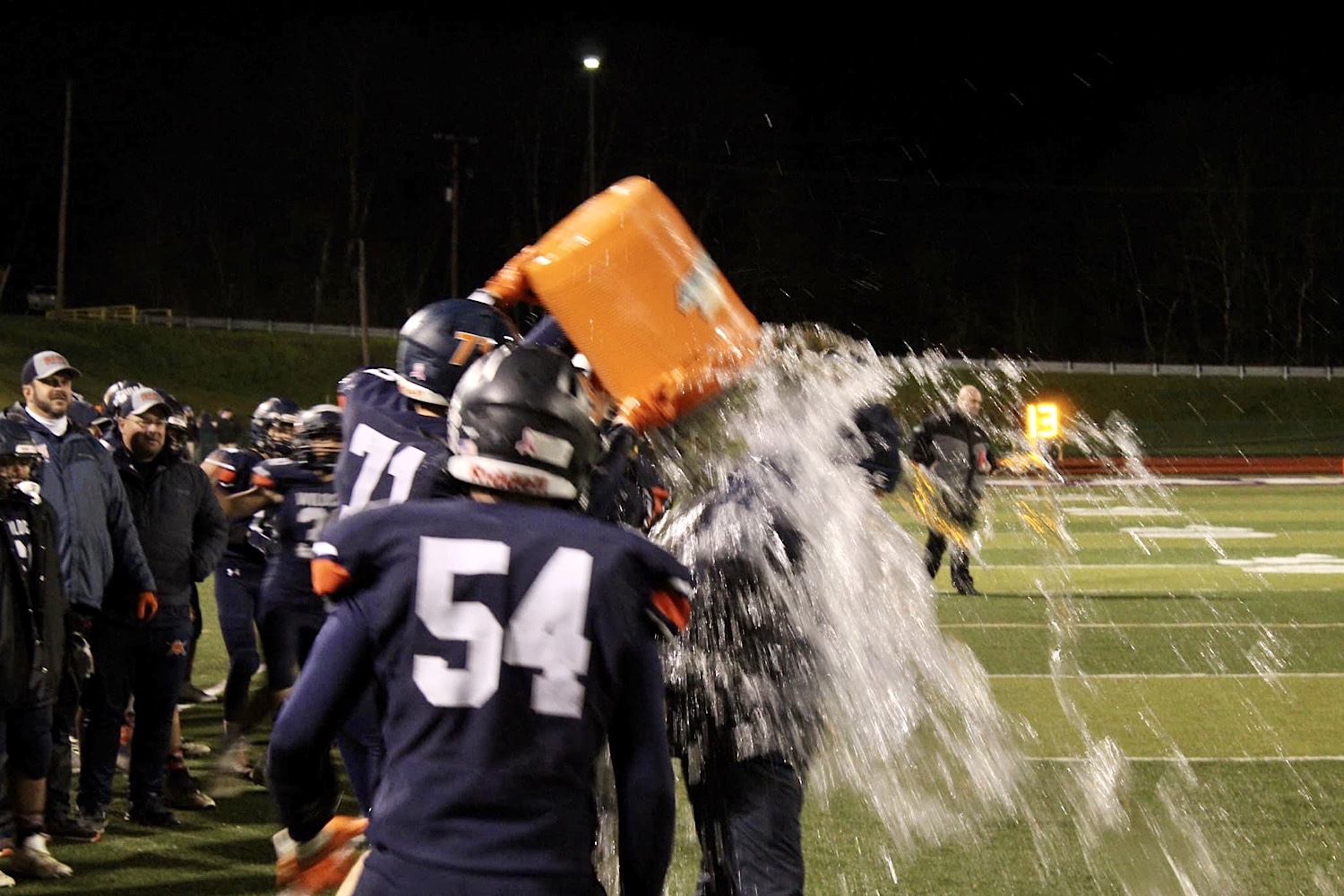 KARNS CITY, Pa. (EYT/D9) — The old saying that defense wins championships certainly held true for Central Clarion as the Wildcats totally shut Brookville down in claiming a 35-0 victory over the Raiders for the District 9 Class 2A championship on Saturday evening at Diehl Stadium in Karns City.

(Pictured above, Central Clarion coach Dave Eggleton is doused after the Wildcats downed Brookville to win the D9 Class 2A title/photo courtesy of the Central Clarion Wildcats Football boosters)

The Wildcats’ defense held the Raiders to just 126 yards of total offense while allowing just five first downs for the game, four of which came in the first quarter. The Raiders punted eight times, had one drive stopped on an interception, and another stopped on downs deep in Central Clarion territory.

“We really didn’t do anything different defensively,” said Central Clarion head coach Dave Eggleton. “Our guys just kept with their keys and stayed in their lanes, and we did a really good job of tackling.”

Meanwhile for Central Clarion on offense it may not have had the gaudy numbers they were putting up this season, but four big plays helped in four of the five touchdowns. The fifth was just a very methodical drive to start the second half, which ended in a score.

Brookville Area High School and Central Clarion football coverage on Explore and D9Sports.com is brought to you by Redbank Chevrolet and DuBrook.

Ferguson completed just 4-of-12 passes, but those completions went for 187 yards with two scores. He also threw no interceptions.

“They were pretty much keying on Ashton, trying to take him away,” said Eggleton. “We hit that one pass to Tommy on the sideline there, which was a nice throw and catch that set up our first touchdown. Once we hit those first couple of big passes, our O-line just kind of took over the game and all our backs were running hard and getting some yards.”

After forcing a punt on Brookville’s first possession, the Wildcats took over at the Raiders’ 25 following a 20-yard punt return. A penalty on their first play from scrimmage moved the ball back to the 37. Ferguson then connected on a 32-yard pass to Smith, which set the ball at the 5. Kopnitsky then ran five yards for the opening score of the game. Thomas Uckert added the PAT kick for a 7-0 lead with 10:20 to play in the first.

Brookville picked up two of their first downs on their next possession and faced a fourth down from the Central Clarion 19. Noah Peterson threw a pass intended for Truman Sharp near the goal line, but Sharp had slipped and the ball fell incomplete turning the ball over the Wildcats.

Four plays later Ferguson connected with Smith on a 57-yard touchdown pass to give Central Clarion a 14-0 lead after one quarter. The two teams combined for five punts in the second quarter with Brookville punting three times and Central Clarion twice.

After the third punt, Central Clarion took over at their own 7-yard line. A pair of runs by Ferguson netted eight yards while Ryan Hummell added a nine-yard run to put the ball at the 24-yard line. Ferguson then hit Rex on a slant and he raced 76 yards for a touchdown. Uckert’s PAT kick put the Wildcats ahead 21-0 at halftime.

Brookville gained its only first down of the second quarter on their final offensive possession before an interception by Ferguson stopped the drive.

Central Clarion took the opening kickoff of the second half and chewed up nearly seven minutes on the game clock by running the ball on 12 consecutive plays with Hummell finishing off the drive with a one-yard plunge for a score at the 5:04 mark. The Uckert PAT pushed the lead to 28-0.

The Brookville offense would run just six plays in the quarter having to punt.

Following another Brookville punt early in the fourth quarter, the Wildcats would take over at the Brookville 36. Five plays later Kopnitsky would score his second touchdown on a three-yard run to push the lead to 35-0 putting the mercy rule running clock into effect for the final 9:33 of the contest.

The big play of the drive would be a 27-yard pass play from Ferguson to Rex which moved the ball to the Raiders five two plays before the score.

Neither team would muster much offense once the running clock started and the game would end in the 35-0 Central Clarion victory.

“This feels fantastic,” said Eggleton of the win and the championship. “This is the happiest I’ve been in my coaching career. I’m so happy for the guys as I told them before the game how they took it upon themselves in the offseason to make sure what happened last year wasn’t going to happen this year.”

Brookville Area High School and Central Clarion football coverage on Explore and D9Sports.com is brought to you by Redbank Chevrolet and DuBrook.