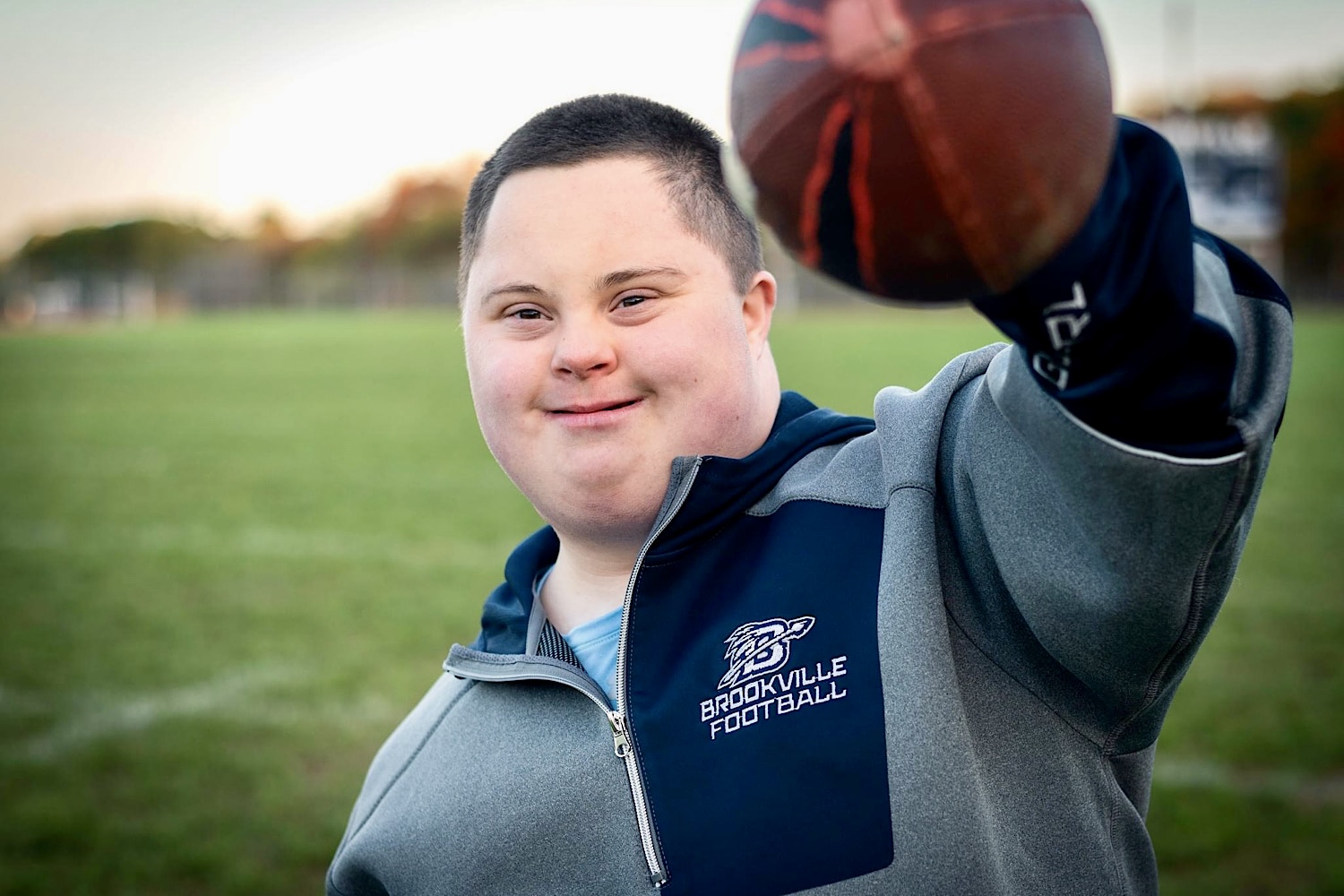 BROOKVILLE, Pa. (EYT/D9) — He is a fixture at the Brookville High School football field.

On Fridays, he counts down the hours until he can go to the field house and begin his pregame routine. During the football game — home or away — he’s always encouraging. Always helpful. Always there for his friends and his team.

And he has some killer dance moves, too, when the celebration begins after a hard-fought victory.

The members of the Brookville football team, as well as the community, know him simply as “Big Mike.”

And Brookville senior Michael Goddard is certainly a big fan of the Raiders.

Born with Down syndrome, Goddard got involved with the football program at Brookville about five years ago. He’s flourished with the team ever since.

“They all really embrace him and that’s so awesome,” said Brookville head football coach Scott Park. “When he gets to the field house, they all yell, ‘Big Mike!’ and he gives all the coaches fist bumps. He’s a great kid. And he loves football. If doing this helps him, that’s great.”

Goddard has long loved football and wanted a way to get involved with the team.

Park, who is a health and physical education teacher at Brookville, had Goddard in class and asked if he wanted to help out the team on Friday nights.

Big Mike jumped at the chance.

Goddard started out bringing water to the players, but his role has since expanded.

“He just wanted to be with the players,” said Goddard’s father, Russ.

After a big win over Karns City on Friday night, Michael congratulated his friends and did jumping jacks with them on the field.

His smile was big and wide — as it usually is after a win.

“When they lose, he’s upset,” Russ said. “He usually goes by the color of the opposing team. If they lose to a team wearing red, he’ll say, ‘Oh, I hate red.’”

Brookville senior Brayden Kunselman counts himself as one of Michael’s best friends.

The two have known each other for a long time and Kunselman said he is thrilled that Michael is such a intregal part of the team. “I’ve been buddies with Mike since the fifth or sixth grade,” Kunselman said. “He’s always been a pleasure and fun to be around. He’s such a goofy kid. He’s always joking around. We always fake fight like we’re pushing each other around. You know, it’s always fun to be around him.”

It’s one of the highlights of a victory.

“He’s in the locker room, dancing around to our music,” Kunselman said, smiling. “It’s the stuff you don’t see that that makes him the kind of person he is. He’s such a pleasure to be around. It’s awesome to have him in the locker room.”

Players before Kunselman also gravitated toward Michael and his uncanny ability to cut through the tension and bring a smile to their faces.

“We love having him on the sidelines,” said senior Noah Peterson. “Even if we’re having a bad night, Michael still will make us smile in the locker room and make us smile with dances. He’s just a great, great friend. He loves us all. I know he loves being around us, too.”

Park said Michael is always welcome, even after he graduates.

Michael is hoping to get a job after graduation, perhaps as a mechanic working with cars.

“He likes working with his hands,” Russ said. “He doesn’t like the retail store stuff — he’s just not that into that. He’s worked in a few garages. He really likes that a lot.”

Russ Jr. also said seeing how the team interacts with his younger brother is heartwarming.

“It’s awesome how well the kids treat him,” he said. “The coaches, everyone, treat him with respect and that’s something you don’t know will happen because of his disability. You worry about him getting picked on and things like that, but the team’s just all about him. They really rally around him and let him be involved. It’s really so great.”

“Big Mike” has also made a name fo himself away from the football team.

He’s well known around Brookville — a sort of hometown celebrity.

“I tell you what, he’s really popular,” Russ Sr. said, grinning. “It seems like everywhere we go, even if we’re just out shopping, someone will say, ‘Hey, Big Mike!’”

For Park and the Brookville football program, Michael has shown the players what it means to be a good friend and teammate.

He’s proud of his team for accepting Michael so completely. He’s also proud of Michael for bleeding navy blue and white.

“It’s wonderful to have him,” Park said. “He wears a jersey at school and he wears it with pride. It’s good to see.”