Brookville Gets Big Wins By Belifiore, Drake to Down Rival Punxsutawney, 50-18 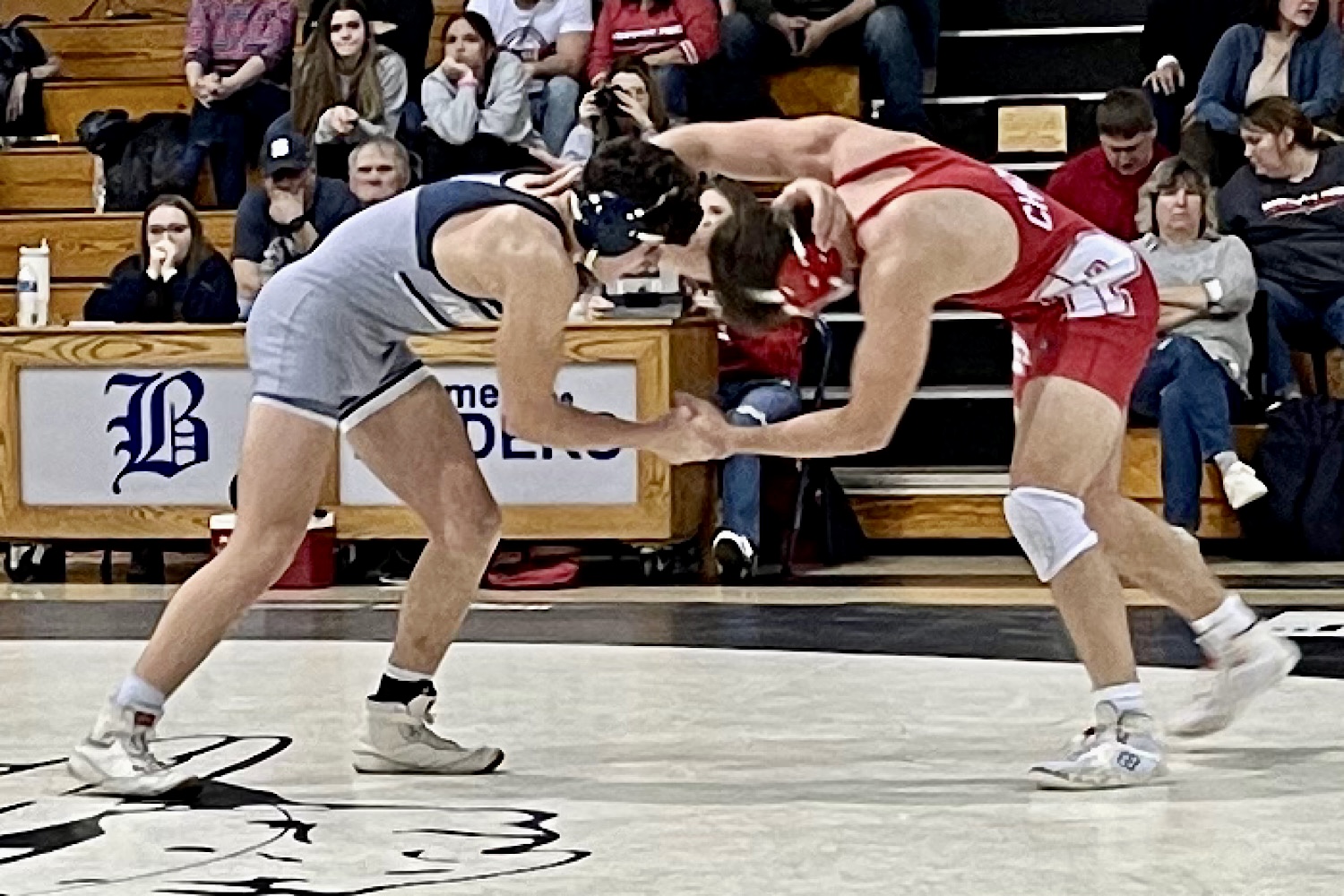 BROOKVILLE, Pa. (EYT/D9) — Late in the first period of his heavyweight bout, Danny Drake found himself on his back on the mat.

The Brookville junior fought to keep from being pinned by Punxsutawney wrestler Aiden Shaffer.

Drake managed to survive to the buzzer, but was in a deep hole, down 5-0.

Drake turned the tables of Shaffer, getting the Chucks’ heavyweight on his back for a fall at the 33-second mark of the second period for a dramatic win that capped off Brookville’s 50-18 victory over rival Punxsy on Tuesday night.

“All I’m trying to do is stay calm,” Drake said of his thought process at the end of the first period, just seconds from getting pinned. “I was just trying to work through until the end of the period.”

That’s just what Drake did.

He came out aggressive in the second period, got a takedown and then managed to turn Shaffer onto his back to get the fall.

“It takes guts,” said Brookville coach Dave Kelpfer. “He was in a tight spot at the end of the first period and he survived it. He got a little help from the clock, but we talk about it all the time in practice, when you find yourself down early, 5-0, it starts with one point.

“That kid ended up taking neutral, so we got a takedown. He picked his way back into the match and then waited for his opportunity on top and made it count.”

Brookville (12-1) made a lot count against Punxsutawney (6-10), despite missing a couple of key wrestlers from its lineup.

Jackson Zimmerman, a 215-pound senior with a strong 19-3 record so far this season, missed the match due to illness. Junior 121-pounder Antonio Thornton also didn’t wrestle.

“We were missing a few tonight,” Klepfer said. “I tell these guys every year on the first day of practice that whether there’s 14 guys on the wall or 32 guys on it, you’re all gonna get to wrestle at some point because things happen.”

Martz came into that bout with a 16-2 record this season.

Belifiore fell behind 2-0 after the first period, but was able to snag a 4-3 lead after two.

Belifiore broke a 4-4 tie in the third period with a takedown and was able to tack on two more points for an 8-4 lead. Martz got an escape and shot at Belifiore’s legs, but the Brookville wrestler was able to keep Martz at bay the rest of the period.

“We gave up an early takedown there, but again, no panic,” Klepfer said. “We talk about it so much that we score enough points in our program to where two points is really nothing that should ever make you panic. He showed some good poise there, especially for being a sophomore. He’s one of our silent leaders.”

Belifiore is still battling a serious high ankle sprain he suffered early in the football season for the Raiders.

He was filling in at quarterback for injured Charlie Krug when he went down.

“I tore two out of the three supporting ligaments in my ankle,” Belifiore said. “The doctor said I shouldn’t have even been able to walk.”

Belifiore said his left ankle still isn’t 100%, but he was eager to get on the mat this winter.

“It took the whole football season, and even the start of wrestling season, and I am still having problems with it,” Belifiore said. “It’s a work in progress. I was just really excited to get back into this stuff with a great group of guys and coaches. It’s a lot of fun.”

Belifiore was still able to go out and beat one of the best wrestlers in D9.

“I wasn’t necessarily satisfied with it,” Belifiore said. “I feel like I could have done more. I always look to score more points, but he’s a very good wrestler.”

It was an overall good night for Brookville.

All of Punxsutawney’s points came via three Brookville forfeits.