Moniteau Making Name for Itself in Competitive Spirit, Heads to PIAA Championships Again Not much went right.

The team finished a disappointing ninth in the Small Varsity Division. They came home dejected.

“I think we all know how last year felt,” said senior Shayla Nagy. “We definitely don’t want to feel that way again.”

The Warriors wanted to put a difficult season full of COVID quarantines and that lackluster performance at the state final behind them.

And now the Warriors will head back to Hershey.

Moniteau won its fourth consecutive District 9 Small Team Division title Saturday on their home mats. It was a big deal for the seniors — Victoria DeMatteis, Lexi Lasichak, Kylee Surrena and Nagy — who have never known anything but first place at a district championships.

“It was really important for the seniors to win all four times,” DeMatteis said. “We work really hard, and we spend a lot of time practicing.”

“It’s literally amazing,” Nagy added. “It just means a lot because every year we switch teams up with seniors graduating and new people coming in and we’re still able to do it.” 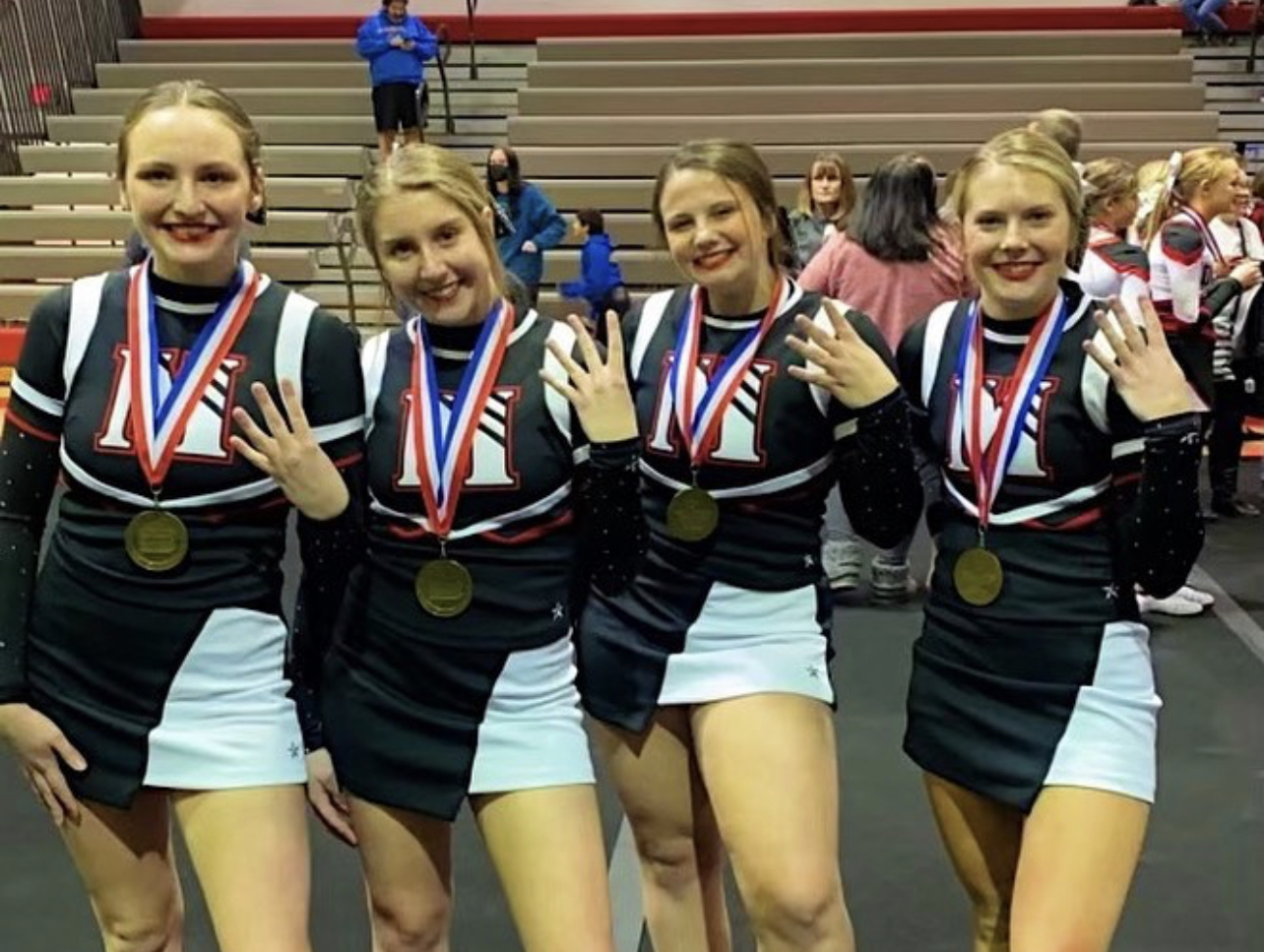 Coach Melissa DeMatteis said the four straight crowns shows the commitment the cheerleaders have to the sports.

They practice tirelessly, she said.

“It means a lot,” the coach said. “It shows how much hard work they put in and the time and effort we put into it. We’re proud. Really proud.”

Moniteau’s performance Saturday wasn’t the cleanest — the Warriors were deducted 5.5 points because of errors — but it was strong in several categories and was good enough to propel the team to the title again.

“It was kind of a bummer,” Nagy said of the errors, which knocked Moniteau’s score out of the 80s. “But it was still our fourth win in a row. Not many teams can say that.”

Now the focus is on cleaning things up for the state finals, which will be held in Hershey Jan. 29.

Moniteau is hoping for a better finish than last season and Coach DeMatteis believes the talent is there on her 12-member team to do it.

The Warriors have been tested this season. They have entered bigger competitions and fared well against much bigger schools.

At one competition, Moniteau placed second behind Bishop McCord, which is the reigning national champion. At another competition against bigger schools, the Warriors won.

“We were pretty darn excited about that,” Coach DeMatteis said. “I think that they bought in more after being successful at those competitions against schools that were significantly bigger than we are.

Moniteau is already prepping for the state finals.

“We’re probably gonna add more difficulty,” Victoria DeMatteis said. “We just have to stay consistent and hit as much of our routine as possible. After last year, I think it makes us want to work even harder and get even better for states this year. We just want to do well for ourselves.”

This will be the Warriors’ fourth trip to compete. People around the state know the name Moniteau.

“That’s huge for us, to know that people know who we are and that people respect us,” Nagy said. “It’s so great we’ve made a name for ourselves.”