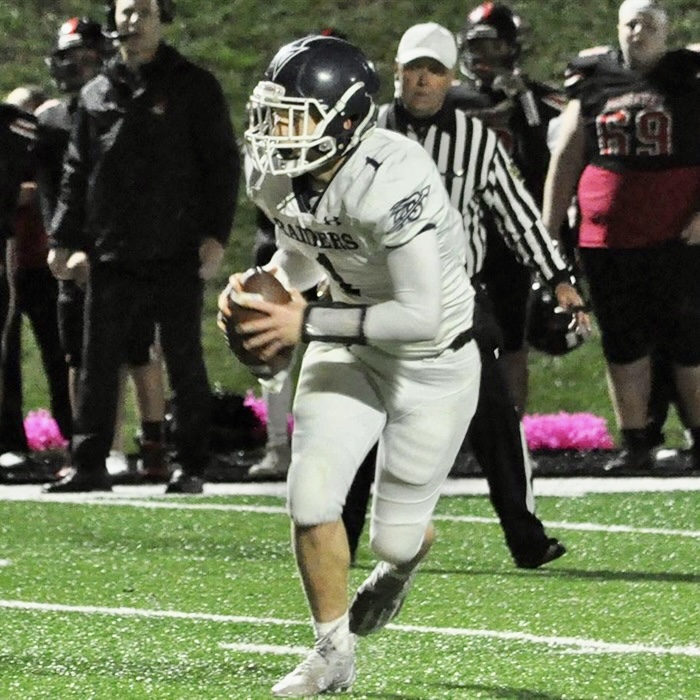 BROOKVILLE, Pa. (EYT/D9) — Charlie Krug is his own worst critic.

The junior quarterback on the Brookville football team was not satisfied with his performance last year for the Raiders, even though he helped his team to a 7-4 record and a playoff berth despite a slew of question marks coming into the campaign.

Most quarterbacks in their first year as the starter would be pretty happy about completing 54% of their passes for 2,009 yards and 23 touchdowns.

But not Krug. He expected more.

“I just want to have a way better season that last year,” Krug said. “I didn’t have a good sophomore season.”

The standard is high for quarterbacks at Brookville. It’s even higher if your last name is Krug.

Jack Krug, Charlie’s older brother, put up staggering numbers as a four-year starter from 2017 to 2020. He missed all but three games as a sophomore due to injury, but still finished his career with 571 completions for 8,362 yards and 108 touchdowns to just 25 interceptions.

“I look up to my brother — he set the bar pretty high. I try not to compare myself to him,” Charlie said, pausing and grinning. “but it happens.”

While Charlie Krug was down on his sophomore season, Brookville coach Scott Park was not.

“We had a lot of unknowns last year,” Park added. “We lost a lot of seniors from the year before and I think the kids, like Charlie, and Noah (Peterson) coming out, really helped us pick up the slack from what we lost.”

There are very few unknowns this time around.

Brookville has an unheard of 10 returning starters on offense and defense. All but two-way standout Hunter Smith is back on the offensive and defensive lines. The entire receiving corps returns, led by senior Brayden Kunselman. And senior running back Jackson Zimmerman figures to be a bigger factor in the running game.

The focus in camp has been on improving that part of the offense to take some of the pressure off Krug.

“We need to run the ball more consistently,” Park said. “If we can combine running the ball with our passing game, I think we will be very hard to stop. I think running the ball is going to be the key to our season.”

To that end, Zimmerman will be the main back, but others will contribute as well.

“I think we’re in a situation this year where we have potential,” Park said. “We have a couple of decent guys who can run the ball.”

Zimmerman rushed for 386 yards and five touchdowns last season. His numbers figure to increase this year.

With a better running game, Krug and his trio of returning receivers could be even more effective.

No one was more dangerous last season than Kunselman, who hauled in 48 passes for 824 yards and nine touchdowns.

Peterson, in his first year at receiver, added 534 yards and eight TDs on 33 receptions; Senior Truman Sharp caught another 25 passes for 261 yards and three scores.

Kunselman was also a force on defense with seven interceptions.

With a wealth of experience back and Krug ready to elevate his game, there are some high hopes in Brookville.

“We’re optimistic — cautiously optimistic,” Park added. “If we can avoid injuries, I think we can put together a season that could be special.”