HYDE, Pa. – After finishing third a season ago, Brookville reasserted its dominance by handily winning the team title this weekend (Feb. 21-22) at the District 9 Individual Championship in Clearfield.

(Photo of Brockway’s Anthony Glasl, who was named the Outstanding Wrestler after winning the title at 132 pounds. Photo by Kenn Staub)

The Raiders (221.5 points), 51.5 points better than second-place Brockway (170 points), finished the event with five individual champions and another quintet of third-place finishers.

Brookville’s head man, Dave Klepfer, was recognized as the 2A Coach of the Year.

Brockway had two titlists and a pair of runner-ups, including the tournament’s Outstanding Wrestler, Anthony Glasl, who won the title at 132 pounds.

Johnsonburg (167.5 points) finished third, two-and-a-half points behind Brockway, with two champions and three second-place finishers. Port Allegany (164.5 points) had a titlist and three runner-ups, closing the event in fourth, just three points out of third. Kane (154 points) rounded out the top five. The Wolves had a pair of champions. Redbank Valley (sixth) and Curwensville (seventh) each placed one on the top step of the podium.

Cayden Walter won Brookville’s first title of the event, pinning Wyatt Shaffer of Johnsonburg in the opening period of their 106-pound bout.

Kane’s Alex Bechakas decisioned Jake Carfley of Curwensville 8-2 for third. Walter’s will be making his second consecutive trip to regionals, but his first as a champion.

The 113-pound finals was a rematch of last year’s 106-pound title match with a similar result. 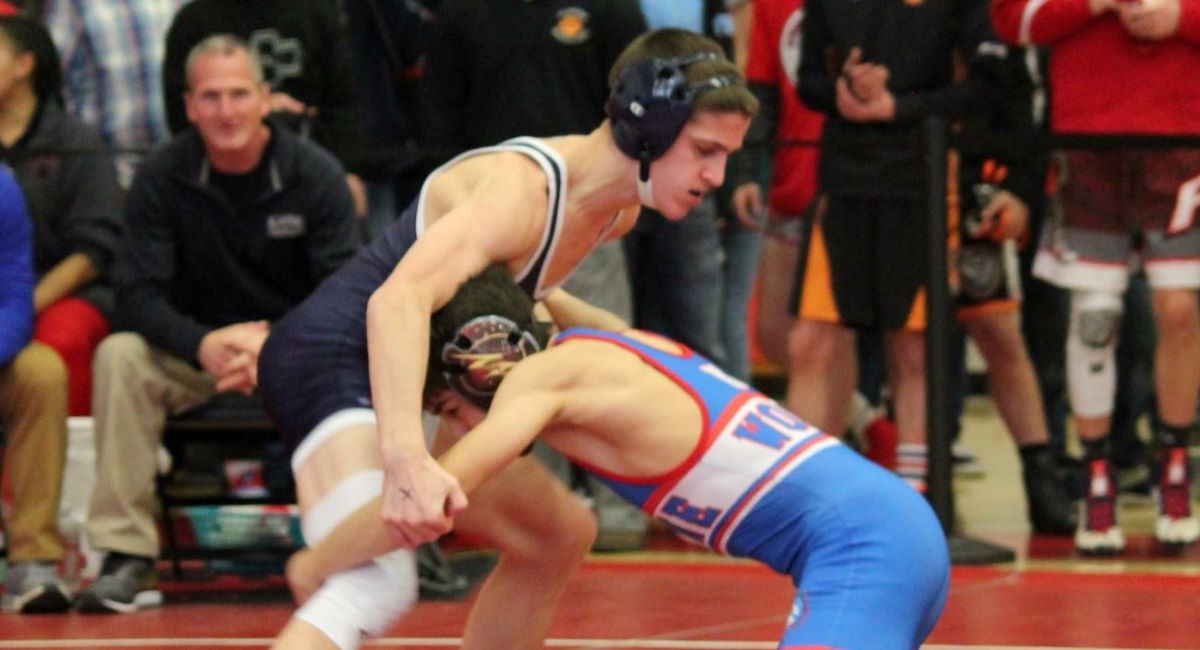 Brayden Kunselman won Brookville’s third consecutive title of the afternoon with an 8-6 decision over Brockway’s Mark Palmer at 120 pounds. Port Allegany’s Braedon Johnson repeated as 126-pound champ with a second period pin (2:51) against Trenton Rupp of Redbank Valley, last season’s titlist at 113 pounds. Johnson is a Smethport student wrestling as a part of a co-op.

Josh Popson of Brookville eked out a 4-0 victory against Harley Morris of Kane for third.

At 132 pounds, Anthony Glasl of Brockway won his fourth consecutive district championship, all of which came in different weight classes, when he pinned Johnsonburg’s Nolan Shaffer in the third period (5:33). Glasl was selected as the tournament’s Outstanding Wrestler for his performance, which included three first-period pins on that way to the title bout.

Port Allegany’s Eli Petruzzi was third, pinning Luke Ely of Kane in the second period of the consolation finals (2:24).

Redbank Valley’s Ethan Wiant won his second straight district title with a 7-0 decision at 145 pounds against Kaden Dennis of Johnsonburg. Aiden Zimmerman of Johnsonburg took a 3-1 victory against Ridgway’s Jacob Wickett for the 152-pound championship. After finishing as a runner-up at 152 pounds last year, Cole Casilio of Johnsonburg took out Ridgway’s Noah Bash 8-3 in the 160-pound bout for his first district championship. This is the second year in a row Bash has finished second at 160 pounds.

Cameron Whisner won Kane’s second consecutive title with a 5-2 victory against Sheffield’s Ethan Finch in the 182-pound bout. Whisner is an East Forest student wrestling as part of a co-op.

Brookville’s Elliot Park went deep into overtime for a 1-0 victory over Tyler Watts of Johnsonburg in the consolation finals.

Brockway’s Eric Johnson repeated as the 195-pound district champion with his 11-5 victory over Aiden Gardner of Redbank Valley.

Brookville closed out the tournament with two titles in a row, the first of which was won by Nathan Taylor at 220 pounds with a 9-2 decision over Justin Young of Port Allegany. Brookville is sending 10 wrestlers to next weekend’s regional tournament in Sharon. Eight from Johnsonburg will be making the trip, seven from Kane, Port Allegany and Redbank Valley, and six from Brockway. Clarion and Curwensville will have three representatives, Ridgway two, and Coudersport, Oswayo Valley, and Sheffield one apiece.