His father Reggie Wells Sr. and his brother Ryan Wells are two of the all-time greats in Clarion University basketball history. Though Reggie had the chance to play collegiate basketball, and it would have been what he cites as “a comfortable decision,” he challenged himself and chose to become a college football player.

Though he was born into a family who loved basketball, and he eventually became a pro in football, he said his first love was baseball. He remembers the 1986 Mets vividly, and this ball club was a big reason he felt drawn to baseball first. However, in high school, his focus turned to football and basketball.

“Growing up, it was not about which sport, but it was more about being active. I have great memories of going to the basketball courts with my dad, and I still call him my first and best coach I have ever had.”

In high school, offers for both basketball and football began pouring in for the South Park native who helped lead his high school football team to a state title in 1997. He also made significant contributions on the hardwood and was drawing attention from PSAC schools in the process. As for football, he had visits at Power 5 institutions during the recruitment process, but ultimately, he chose Clarion and not for the reasons many may assume. 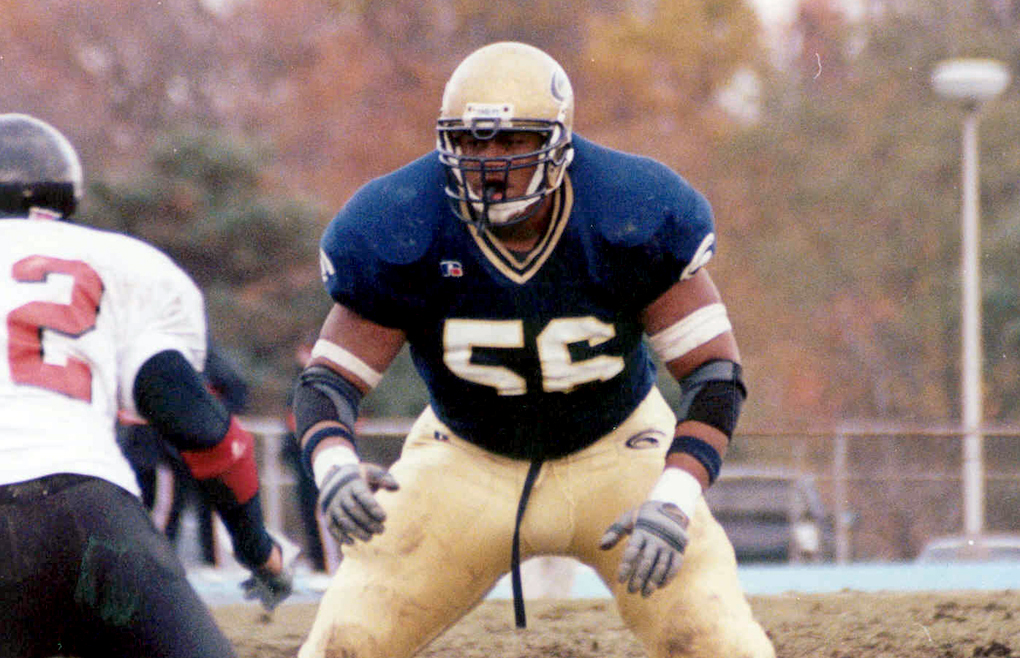 Yes, Clarion University is synonymous with the Wells family, but Reggie did not pick the school based on family tradition. In fact, he chose to become a Golden Eagle because he had fun times there on some visits and felt like he could be himself both on the gridiron and as a student. The decision to go to Clarion was one that changed his life for the better as he stayed grounded and put in the work to improve his abilities.

Wells was a four-year starter but did battle through a gruesome and career-threatening knee injury suffered in his sophomore season. A torn ACL was the challenge Wells faced at that point in his career, and doctors and his family consulted to make the best decision on how the surgery should be done.

Though it was a gamble, they decided that Wells needed the surgery that would allow him to continue playing football, and that made a huge difference. From that moment on, Wells was dedicating his time to become a professional football player. Through an extensive rehab process, Wells was able to work back and be the starting offensive tackle for his junior season at Clarion: a season that saw him attract attention from NFL scouts for the first time. He still recalls the first time that an NFL Scout came to Clarion and had a conversation with him about the possibility of playing in the NFL.

“After my junior year, a scout from the Titans came to Clarion, and then a representative from almost every team would eventually come to the university. The meeting with the Titans’ scout is what I look at as what got me to be known by everyone and get that foot in the door that I could play at that level.”

In 2001, Wells was named a first-team PSAC-West, East Region, and HM Football Gazette All-American for his standout play. The next season, Wells followed it up by being named a first-team AP and AFCA All-America honoree. Additionally, he was named a Second-Team All-American and was selected to play in the Cactus Bowl, a Division II All-Star football game in 2003. Wells became one of 11 players from the 2003 game to make an NFL roster and one of four players drafted from this game when later in 2003, the Arizona Cardinals called his name in the sixth round with pick 177.

Wells recalls this moment vividly and said this about realizing a dream of his: “Thoughts went through my head on the third day about all the work that went into it. There was so much work and adjusting coursework to train for the draft in that spring semester. I was going to the combine and working out with guys with full scholarships who took classes in the summer, and I had to manage classes and prepare for the draft. I can remember being with my brother and my closest friends, and that was the first time I had actually ever watched the NFL Draft because not all the rounds were televised before that. I got a call from a 602 area code I did not recognize and that ended up being the Cardinals. To this day, that is the most voicemails and texts that I ever got in one day. I have nothing but great memories about being drafted.”

While Wells was indeed drafted, his journey did not just stop there. In fact, it was just getting started as he went from backup to starter to captain in his time with the Arizona Cardinals from 2003 to 2009. He was able to make it to a Super Bowl with the Cardinals and even scored a touchdown in his time with Arizona. After a great run with the organization, he was traded to the Philadelphia Eagles in 2010 and became a starting tackle.

In 2011, his NFL career became a little more complicated as he had two separate stints with the Carolina Panthers before spending time with Green Bay, Buffalo, and San Diego twice in his final NFL season in 2012. Though his playing days were behind him, his love for the game and athletics remained, and it was time to transition to coaching much like his father Reggie Sr. who became an outstanding girls basketball coach after his days as a professional basketball player ended.

Wells would spend time in the offseason helping coach girls basketball, and this was the first time he had ever really coached as a part of a team. Previously, he spent time as a camp counselor at his dad’s Reggie Wells basketball camps which set in motion a great foundation on how to be a positive influence in the lives of young people.

From 2015 to 2018, he was an assistant football coach at Fox Chapel High School in charge of the offensive line group. He transitioned over to Peters Township for the 2018 season and Mt. Lebanon for the 2019 season. However, Wells is no longer a coach in the WPIAL. In fact, he has rejoined the PSAC by way of the California University of Pennsylvania as a volunteer assistant coach with the Vulcans program. Though the Vulcans have not played a game since Wells began his tenure there, he has already become a positive role model to the young men he is working with.

“I really enjoy working in the PSAC because of fabulous coaches and athletes that compete in the conference. I have always thought there was great professionalism in this conference, and I am glad to be helping out. Zooming and getting acquainted with the team was difficult at first, but it has taught me so much already, and I am glad to be spending time with this group.”

When looking back at his time in the NFL, Wells mentioned the difficulties of playing in Seattle every season because of the Seahawks’ loud and proud “12th Man” who make it incredibly hard to hear when down on the field. He had plenty of battles with some fantastic San Francisco 49ers defenses and could not name just one player who was a difficult matchup for him to line up against.

“The division matchups are ones I remember the most, and there are so many great players and athletes to give credit to. I cannot pick just one because all of them are great in their own right, and I would leave great players off the list if I listed them all.”

When asking the former Cardinals draft choice what advice he gives to young men who say they want to play in the NFL, he said, “I tell them it is a possibility if they are willing to put in the work. They cannot waste time, and they have to get things done. I tell them they have to work to put themselves in that reality that they want.”

While Wells is most known for his role in athletics, something to keep in mind is despite leaving Clarion without a degree, he studied and completed his undergraduate degree in communications alongside his father in 2008.

“This was one of the biggest moments of my life. I chose not to waste time and get the degree as soon as I could. Doing that together ranks at the top of all-time moments for the Wells family.”

Now in 2021 with his family and his players by his side, Wells continues to make an impact in the game that he loves. It is not a story finished, but a new chapter for Wells as he adds college football coach to an already incredible resume. This is not the last time anyone will be seeing his name when it comes to football as his journey in coaching is just getting started.