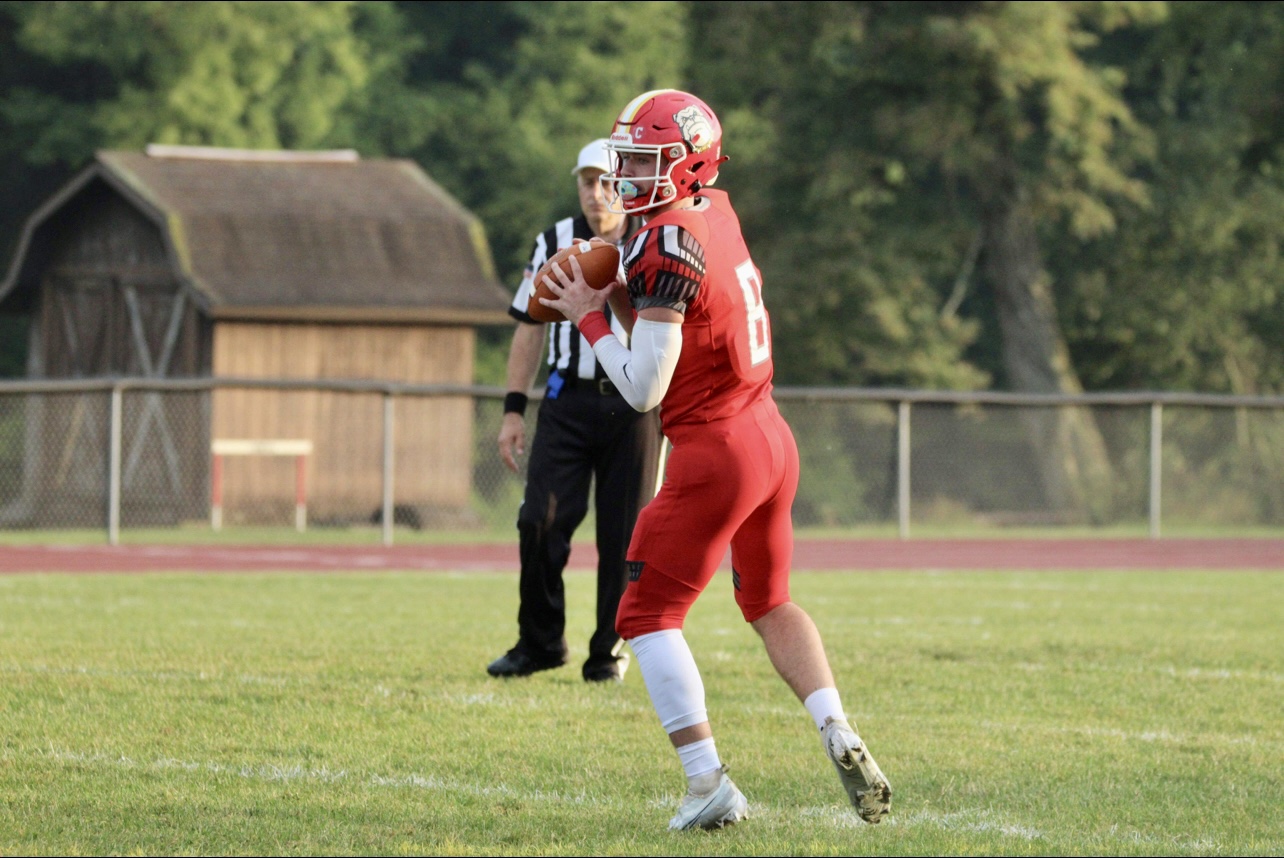 (Cam Wagner has a big season debut for Redbank Valley, throwing for 228 yards and five touchdowns/photo by Madison McFarland.)

Wagner was nearly flawless on Friday night — the Redbank Valley senior’s first start at quarterback in two years — completing 8 of 9 for 228 yards and five touchdowns to five different receivers, as the Bulldogs rolled to a 53-8 win over a depleted Smethport team at home.

“I’m sure that there’s some people who felt that I was overconfident or rolled their eyes when I (said) that I felt we could go with Cam and not miss a beat,” said Redbank Valley coach Blane Gold. “He showed that tonight.”

After a close competition, Gold chose Bain, who had never played football before his senior year. Bain responded with a 30-touchdown season that helped the Bulldogs reach the PIAA Class A championship game.

Gold has always maintained that any of the three could have won that job.

“It was such a razor-thin margin between the three of them, especially between Cam and Bryson because they were similar,” Gold said. “Cam has enhanced his ability by his willingness to run the bal. He adds that dimension.”

But he did a great deal more of his damage with his strong right arm.

He threw first-quarter touchdown passes of 7 yards to Mason Clouse, 40 yards to Ashton Kahle, 41 yards to Kaden Rupp and 8 yards to Aiden Ortz to put Redbank up 29-0 after 12 minutes.

He then found Tate Minich on a 74-yard TD strike less than a minute into the second quarter for a 36-0 lead.

Wagner later added a score on a 14-yard run and Drew Byers raced 92 yards for a touchdown to put the Bulldogs up 53-0 at the half.

Smethport brought just 16 players for the game. The Hubbers had 15 players missing — seven of whom were starters — because of academic issues dating back to last spring.

“This was a game that scared us all week because even though they lost (Noah Lent), they basically had everyone else back,” Gold said. “We didn’t know their situation until they got here.”

Ryan Pelchy led Smethport with 139 yards on 16 carries and a 17-yard touchdown in the second half.

Ortz had three receptions for 55 yards and Minich two catchers for 85 yards.

Owen Clouse, who gave up football years ago because of concussion issues, rejoined the team this season as the place kicker and booted five extra points. He also scored two 2-point conversions, one on a run and one on a reception from Mason Clouse.

Now Redbank has served notice that there is no drop off at the QB position — and maybe no drop off at all for a team that came a score away from winning a state title last season.

“We have no regrets with what we did last year, but it was a decision that was really, really hard,” Gold said. “The edge Cam has on Bryson, which is going to help him this year, is he’s played football his whole life. He’s been playing in our system the whole way back to seventh grade. This is his sixth year in our system.”