Celebrating History: On 100th Anniversary of Football in New Bethlehem, Redbank Valley Honoring the Past 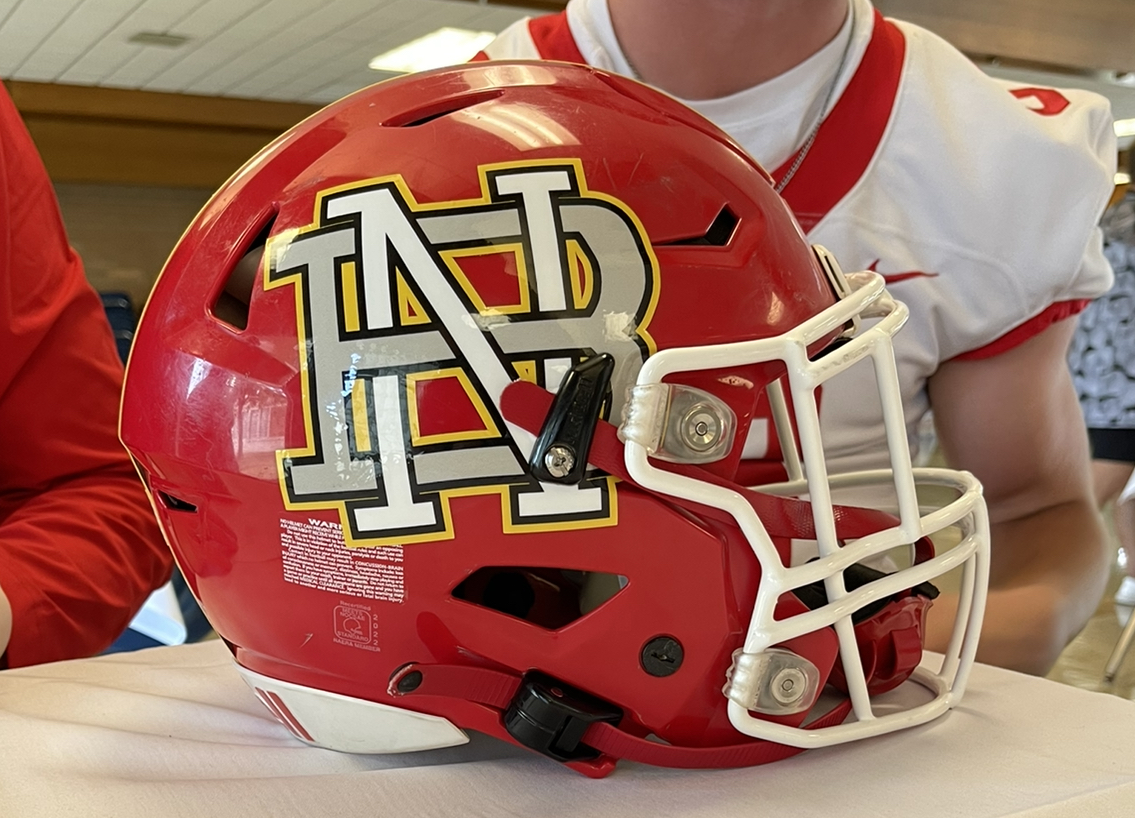 In celebration of the 100th anniversary of football in New Bethlehem, the Redbank Valley football team will don an interlocking N and B on the right side of the helmet in tribute of the early years of the program.

Yankee Stadium was under construction in the Bronx.

And so was high school football in New Bethlehem.

The year was 1922. New Bethlehem was still a fledgling town located on what was once 50-acres of wilderness tucked in the elbow of the Redbank Creek, founded in 1930 by Henry “Gum” Nolf.

By 1922, “Gumtown” was flourishing. High school football was also gaining a foothold in the country as more and more schools formed teams.

New Bethlehem went 3-5 in that inaugural season. There were wins over Falls Creek, Knox and Reynoldsville and defeats against DuBois, Ford City and Clarion Normal.

In a century since, there have been good years and bad, legendary players and coaches and a lot of history.

This year, Redbank Valley will celebrate 100 years of football. Players and coaches are aware of what that means to the school and the community.

“I mean, it’s just crazy to think about that, that it’s been 100 years,” said Redbank Valley senior wide receiver/defensive back Cole Bish. “It makes you think about and realize we’re not really playing for ourselves. We’re playing for this town. The football team has been here for 100 years, so you’re playing for history, not just this year.” Mason Clouse knows a little bit about the history of the program.

“He’s told me a lot,” Mason said. “Football has definitely changed from no to back when he played. It’s definitely more advanced now.”

Back in 1922, the game was unrecognizable to the one being played today.

The NFL was only two years old. Just two decades earlier, the game was nearly banned in the United States because of its unbridled violence. Newspaper articles of the day compared it to gladiatorial combats in ancient Rome.

President Theodore Roosevelt saved the game by helping institute an array of rules to make the game safer, such as the forward pass.

In 1922, though, most high school teams stuck to the ground, still in tight formations.

New Bethlehem was no different.

The program enjoyed its first winning season in 1925 when New Bethlehem went 5-3-1.

One of the best seasons in the 100 years of football at the school came a few years later in 1930. The team was 8-0-2 under coach W.K. Dunton. During that campaign, New Bethlehem didn’t give up a single point, outscoring foes 248-0.

There were two scoreless ties in back-to-back weeks to end the season, against Rimersburg and Apollo.

“When we were looking at the history, that 1930 team jumped out,” said Redbank Valley football coach Blane Gold. “Not giving up a single point in 10 games — that’s crazy. That’s absolutely ridiculous, no matter the era.” Redbank Valley quarterback Jake Dougherty broke the team’s record for career passing yards in Week 1’s win over Clarion-Limestone in 2014. It’s just one of the highlights of 100 years of football history in New Bethlehem

That first year for the Bulldogs under coach Howard Jones, the team went 4-4-1.

Gold said he and his coaches have tried to make the players aware of the history.

Some already got a taste of it three years ago when the program notched its 500th win in 2019.

That discussion inevitably begins with the rich history of football in New Bethlehem.

The program has had far more winning seasons than losing ones over 100 seasons.

“I think a thing that’s unique about it is it’s 100 years with a winning record,” Gold said. “You look at it, over those 100 years, that’s over five wins a season. When you talk about high school football, where there’s constantly change and turnover, and when you talk about a small school like us, the fact that the community has had winning football for 100 years, it says a lot.”

Only five District 9 programs have more wins than Redbank Valley. Redbank Valley’s Marquese Gardlock celebrates during the 2021 PIAA Class A championship game in Hershey last December. The Bulldogs made it to the state title game for the first time in school history.

Redbank Valley is by far the youngest of that group.

The Bulldogs want to keep adding to that victory total.

“We talk about it all the time, about how it’s really on each senior class to carry the tradition forward. There’s been a lot of winning tradition before us.”

The seniors take that seriously.

“I think it’s special being her for the 100th year,” said senior Brandon Ross. “We have to play for our community and everybody here who has supported us.”

To commemorate the 100 years, one side of the Redbank Valley helmet will have a New Bethlehem logo depicting and interlocking N and B.

Another nod to history.